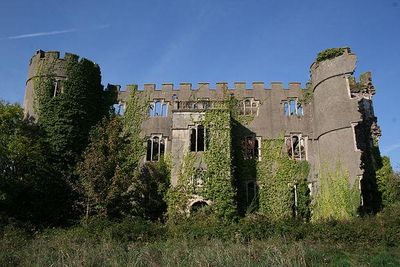 Ruperra Castle or Rhiwperra Castle is a Grade II* Listed building and Scheduled Ancient Monument, situated in Lower Machen in the county borough of Caerphilly, Wales. It was built in 1626, now it is in a ruined condition.

Built in 1626 by Sir Thomas Morgan, Steward to the Earl of Pembroke, it was one of the first of the 'mock' castles to be built in Wales. King Charles I spent two nights at Ruperra Castle in 1645 shortly after the Battle of Naseby. Resultantly the royal coat of arms was added to the decoration on the South Porch, and the present public footpath from Rudry to the Castle is still known as "King's Drive."