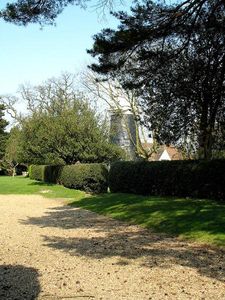 Barnet Gate Mill or Arkley Windmill is a grade II* listed tower mill at Barnet Gate in the London Borough of Barnet, originally in Hertfordshire, which was built in 1823. There is no public access.

Barnet Gate Mill was built in 1823. A claim that it was built during the Napoleonic Wars has not been substantiated. Although steam had been added in 1895, it was working by wind until 1918, latterly on two sails. The mill was restored in 1930. A new cap, fantail and gallery around the cap being made. The work was done by Thomas Hunt, the Soham millwright. In a further restoration in 1985, the missing pair of sails was replaced.