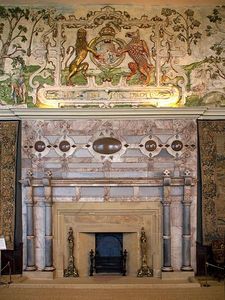 Hardwick Hall , in Derbyshire, is an architecturally significant Elizabethan country house in England, a leading example of the Elizabethan prodigy house. Built between 1590 and 1597 for the formidable Bess of Hardwick, it was designed by the architect Robert Smythson, an exponent of the Renaissance style of architecture. Hardwick Hall is one of the earliest examples of the English interpretation of this style, which came into fashion having slowly spread from Florence. Its arrival in Britain coincided with the period when it was no longer necessary or legal to fortify a domestic dwelling. Ownership of the house was transferred to the National Trust in 1959. It is fully open to the public and received 285,379 visitors in 2018.
Sited on a hilltop between Chesterfield and Mansfield, overlooking the Derbyshire countryside, Hardwick Hall was designed by Robert Smythson in the late 16th century. Ordered by Bess of Hardwick, Countess of Shrewsbury and ancestress of the Dukes of Devonshire, it was owned by her descendants until the mid-twentieth century.