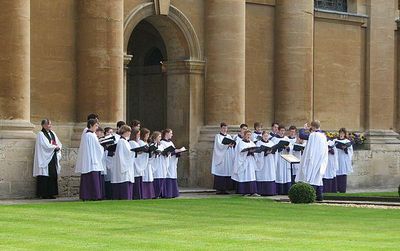 The Queen's College is a constituent college of the University of Oxford, England. The college was founded in 1341 by Robert de Eglesfield in honour of Queen Philippa of Hainault . The college is distinguished by its predominantly neoclassical architecture, which includes buildings designed by Sir Christopher Wren and Nicholas Hawksmoor.
The college was founded in 1341 as "Hall of the Queen's scholars of Oxford" by Robert de Eglesfield , chaplain to Queen Philippa of Hainault , after whom the hall was named. Robert's aim was to provide clergymen for his native Cumberland and where he lived in Westmorland . In addition the college was to provide charity for the poor. The college's coat of arms is that of the founder; it differs slightly from his family's coat of arms, which did not include the gold star on the breast of the first eagle. The current coat of arms was adopted by d'Eglesfield because he was unable to use his family's arms, being the younger son. d'Eglesfield had grand plans for the college with a provost, twelve fellows studying theology, up to thirteen chaplains, and seventy-two poor boys. However the college did not have the funding to support such numbers and initially had just two fellows.