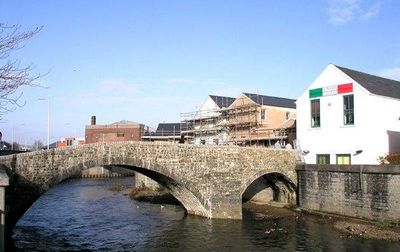 Bridgend of the bridge on the Ogmore") is a town in Bridgend County Borough in Wales, 20 miles west of the capital Cardiff and 20 miles east of Swansea. The river crossed by the original bridge, which gave the town its name, is the River Ogmore, but the River Ewenny also passes to the south of the town.

Historically a part of Glamorgan, Bridgend has greatly expanded in size since the early 1980s – the 2001 census recorded a population of 39,429 for the town and the 2011 census reported that the Bridgend Local Authority had a population of 139,200 – up from 128,700 in 2001. This 8.2% increase was the largest increase in Wales except for Cardiff. The town is undergoing a redevelopment project, with the town centre mainly pedestrianised and ongoing works including Brackla Street Centre redevelopment to Bridgend Shopping Centre, Rhiw Car Park redevelopment, ongoing public realm improvements and the upgrade of the Bridgend Life Centre and demolition of Sunnyside offices to accommodate a large retirement complex.