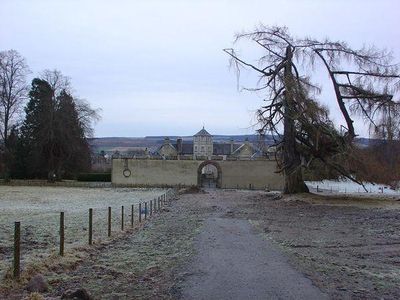 The Battle of Alltan-Beath also known as the Battle of Ailtan-Beath was a Scottish clan battle said to have taken place in the year 1542 in the village of Knockarthur , in Sutherland, in the Scottish Highlands. It was fought between men of the Clan Mackay and men of the Clan Sutherland whose chiefs were the Gordon, Earls of Sutherland.
17th-century historian, Sir Robert Gordon, who himself was a son of Alexander Gordon, 12th Earl of Sutherland, wrote an account of the background events leading up to the battle: Gordon states that there was peace between the Mackays and Sutherlands from the death of John Mackay in 1529 until the year 1542 when chief "Donald Mackay came with a company of men to the village of Knockartel, burnt the same, and took a prey of goods from Strathbrory". He goes on to say that the goods were soon recovered and that soon afterwards Donald Mackay again invaded Sutherland and marched as far as Skibo Castle and encamped there.