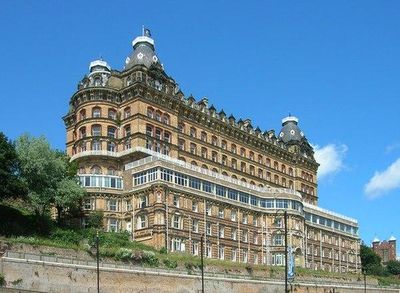 The Grand Hotel is a large hotel in Scarborough, North Yorkshire, England, overlooking the town's South Bay. It is a Grade II* listed building and owned by Britannia Hotels. At the time of its grand opening in 1867, it was the largest hotel and the largest brick structure in Europe.

The hotel was designed by the Hull architect Cuthbert Brodrick, who was better known as the designer of several Leeds buildings, and when completed in 1867 was one of the largest hotels in the world, as well as one of the first giant purpose-built hotels in Europe. The hotel's yellow brickwork was made locally in Hunmanby and is complemented with traditional red brickwork around the windows. The architectural sculpture was executed by Burstall and Taylor of Leeds.