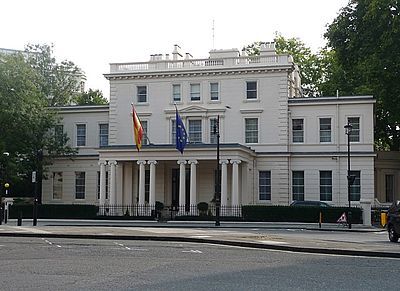 Belgrave Square is one of the grandest and largest 19th-century squares in London. It is the centrepiece of Belgravia, and was laid out by the property contractor Thomas Cubitt for the 2nd Earl Grosvenor, later the 1st Marquess of Westminster, in the 1820s. Most of the houses were occupied by 1840. The square takes its name from one of the Duke of Westminster's subsidiary titles, Viscount Belgrave. The village of Belgrave, Cheshire is two miles from the Grosvenor family's main country seat of Eaton Hall. Today, many embassies are based in the square.
The original scheme consisted of four terraces, each made up of eleven grand white stuccoed houses, apart from the south-east terrace, which has twelve; detached mansions in three of the corners; and a private central garden. The numbering is anticlockwise from the north: NW terrace Nos. 1 to 11; west corner mansion No. 12; SW terrace Nos. 13 to 23; south corner mansion No. 24; SE terrace Nos. 25 to 36; east corner mansion No. 37; NE terrace Nos. 38 to 48. There is also a slightly later detached house at the northern corner, No. 49, which was built by Cubitt for Sidney Herbert in 1851. The terraces were designed by George Basevi and are possibly the grandest houses ever built in London on a speculative basis. The largest of the corner mansions, Seaford House in the east corner, was designed by Philip Hardwick, and the one in the west corner was designed by Robert Smirke. The square features statues of Christopher Columbus, Simón Bolívar, José de San Martín, Prince Henry the Navigator and the 1st Marquess of Westminster, a bust of George Basevi, and a sculpture entitled Homage to Leonardo by Italian sculptor Enzo Plazzotta.