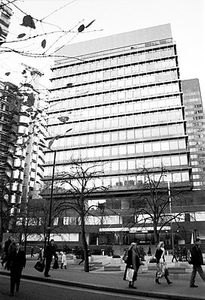 122 Leadenhall Street, officially known as the Leadenhall Building, is a 225 m tall building on Leadenhall Street in London. The commercial skyscraper, opened in July 2014, was designed by Rogers Stirk Harbour + Partners and is informally known as "The Cheesegrater" because of its distinctive wedge shape. It is one of a number of new tall buildings recently completed or currently under construction in the City of London financial area, including 20 Fenchurch Street, 22 Bishopsgate, and The Scalpel.
The building is opposite the Lloyd's building, also designed by Rogers, which is the home of the insurance market Lloyd's of London. Until 2007 the Leadenhall site was occupied by the P&O Tower , a building owned by the developer British Land and designed by Gollins Melvin Ward Partnership that was completed in 1968 as a brother to the still existing Commercial Union tower, now called St. Helen's. That building was demolished in preparation for redevelopment of the site. The project, initially delayed due to the financial crisis, was revived in 2010 and Oxford Properties co-developed the property in partnership with British Land.