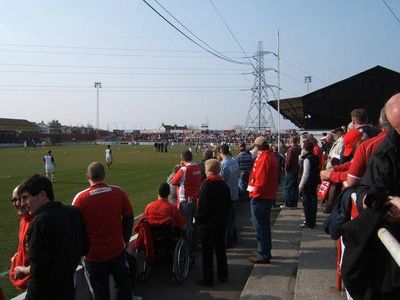 Ebbsfleet United Football Club are an English professional football club based in Northfleet, Kent, that compete in the National League South, the sixth tier of English football. Their home ground has been Stonebridge Road since its inception in 1946. Before 2007, the club was called Gravesend & Northfleet. Between 2008 and 2013, the club was owned by the web-based venture MyFootballClub, whose members voted on player transfers, budgets and ticket prices among other things instead of those decisions being made exclusively by the club's management and staff as at most other clubs.
Gravesend & Northfleet F.C. was formed in 1946, following the Second World War, after a merger between Gravesend United and Northfleet United with the new club retaining the red & white home colours of Northfleet United. From 1969 and 1971, Roy Hodgson, who later became manager of the national teams of Switzerland, United Arab Emirates, Finland and England, was a player at the club, making 59 appearances. In 1979, the team was one of the founder members of the Alliance Premier League, but were relegated back into the Southern League Premier Division three seasons later.