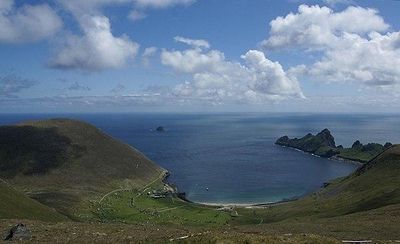 St Kilda is an isolated archipelago situated 64 kilometres west-northwest of North Uist, in the North Atlantic Ocean. It contains the westernmost islands of the Outer Hebrides of Scotland. The largest island is Hirta, whose sea cliffs are the highest in the United Kingdom. Three other islands were also used for grazing and seabird hunting. The islands are administratively a part of the Comhairle nan Eilean Siar local authority area.
The origin of the name St Kilda is a matter of conjecture. The islands' human heritage includes numerous unique architectural features from the historic and prehistoric periods, although the earliest written records of island life date from the Late Middle Ages. The medieval village on Hirta was rebuilt in the 19th century, but illnesses brought by increased external contacts through tourism, and the upheaval of the First World War contributed to the island's evacuation in 1930. The story of St Kilda has attracted artistic interpretations, including Michael Powell's film The Edge of the World and an opera.