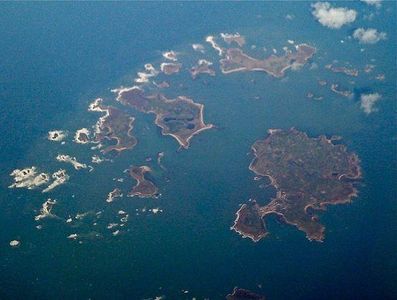 St Agnes joins the island of Gugh by a tombolo, a kind of sandbar, called the Gugh Bar, which is exposed only at low tide. The Gugh is inhabited, with some three residents. The two islands of St Agnes and Gugh together have a population of 85 residents recorded in the 2011 census and a landmass of 366 acres . Without the Gugh included, St Agnes is marginally smaller than Bryher in either population or area; however if Gugh is included with St Agnes, it is Bryher that is marginally smaller in area and population.