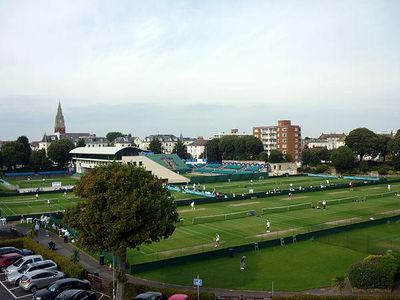 The Eastbourne International is a tennis tournament on the Women's Tennis Association Tour and the ATP World Tour held at the Devonshire Park Lawn Tennis Club, Eastbourne, United Kingdom. Held since 1974, it is classified as a WTA Premier tournament on the WTA Tour and an ATP World Tour 250 series on the ATP World Tour. The tournament is played on outdoor grass courts, and is generally considered a "warm-up" for the Wimbledon Grand Slam event, which begins the following week. It was originally just part of the Women's Tennis Association Tour, but from 2009 it was introduced as an ATP Tour event. It replaced the Nottingham Grass court tournament from 2009–2014. Nottingham returned for 2015–2016 with no ATP Tour event in Eastbourne, however Eastbourne replaced the Nottingham event again from 2017 onwards. It is currently sponsored by Nature Valley. Before the sponsor change, the event was sponsored by AEGON.
During 2007, lack of sponsorship for the Eastbourne tournament led the Lawn Tennis Association to consider moving the tournament to London. However, as part of a general reorganisation of United Kingdom professional tennis tournaments, it was instead decided to merge the event with the Nottingham Open, traditionally held during the same week. From 2009, therefore, the Eastbourne courts have hosted a combined women's and men's event until 2014. In 2015 and 2016 it was an only Ladies event . In 2017, the Eastbourne tournament returned to being a combined event.