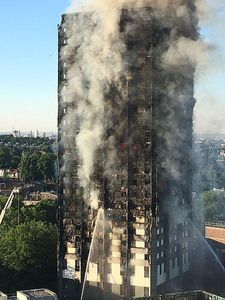 On 14 June 2017, a fire broke out in the 24-storey Grenfell Tower block of flats in North Kensington, West London, at 00:54 BST; it caused 72 deaths, including those of two victims who later died in hospital. More than 70 others were injured and 223 people escaped. It was the deadliest structural fire in the United Kingdom since the 1988 Piper Alpha disaster and the worst UK residential fire since the Second World War.

The fire was started by a malfunctioning fridge-freezer on the fourth floor. It spread rapidly up the building's exterior, bringing fire and smoke to all the residential floors. This was due to the building's cladding, the external insulation and the air gap between which enabled the stack effect. The fire burned for about 60 hours before finally being extinguished. More than 250 London Fire Brigade firefighters and 70 fire engines were involved from stations across London in efforts to control the fire, and rescue residents. More than 100 London Ambulance Service crews on at least 20 ambulances attended, joined by specialist paramedics from the Ambulance Service's Hazardous Area Response Team. The Metropolitan Police and London's Air Ambulance also assisted the rescue effort.