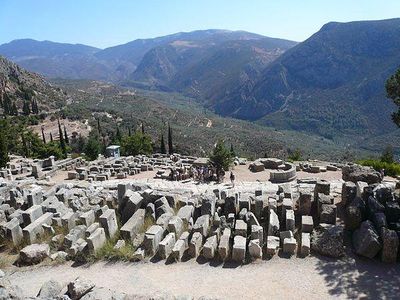 Delphi , in legend previously called Pytho , in ancient times was a sacred precinct that served as the seat of Pythia, the major oracle who was consulted about important decisions throughout the ancient classical world. The oracle was international in character and also fostered sentiments of Greek nationality, even though the nation of Greece was centuries away from realization. The ancient Greeks considered the centre of the world to be in Delphi, marked by the stone monument known as the omphalos . The sacred precinct was in the region of Phocis, but its management had been taken away from the Phocians, who were trying to extort money from its visitors, and had been placed in the hands of an amphictyony, or committee of persons chosen mainly from Central Greece. According to Suda, the Delphi took its name from the Delphyne, the dragon who lived there and was killed by the god Apollo .
The sacred precinct occupies a delineated region on the south-western slope of Mount Parnassus. It is now an extensive archaeological site. Adjacent to the sacred precinct is a small modern town of the same name. The precinct is recognised by UNESCO as a World Heritage Site in having had a great influence in the ancient world, as evidenced by the various monuments built there by most of the important ancient Greek city-states, demonstrating their fundamental Hellenic unity. It would be impossible to remove the influence of the Delphic oracle from the written history of the times.