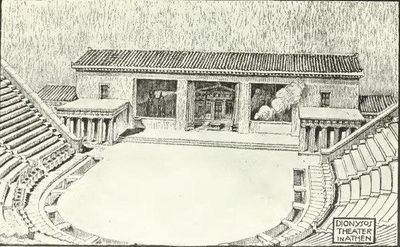 The Theatre of Dionysus is an ancient theatre in Athens on the south slope of the Akropolis hill, built as part of the sanctuary of Dionysos Eleuthereus . The first orchestra terrace was constructed on the site around the mid- to late-sixth century BC, where it hosted the City Dionysia. The theatre reached its fullest extent in the fourth century BC under the epistates of Lycurgus when it would have had a capacity of up to 17,000, and was in continuous use down to the Roman period. The theatre then fell into decay in the Byzantine era and was not identified, excavated and restored to its current condition until the nineteenth century.
The cult of Dionysus was introduced to Attica in the archaic period with the earliest representation of the God dating to c. 580 BC. The City Dionysia began sometime in the Peisistratid era. and was reorganised during the Kleisthenic reforms of the 520s BC. The first dramatic performances likely took place in the Agora where it is recorded that the wooden bleachers set up for the plays collapsed. This disaster perhaps prompted the removal of dramatic production to the Sanctuary of Dionysus on the Akropolis, which took place by the time of the 70th Olympiad in 499/496 BC. At the temenos the earliest structures were the Older Temple, which housed the xoanon of Dionysos, a retaining wall to the north and slightly further up the hill a circular terrace that would have been the first orchestra of the theatre. The excavations by Wilhelm Dörpfeld identified the foundations of this terrace as a section of polygonal masonry, indicating an archaic date. It is probable there was an altar, or thymele, in the centre of the orchestra. No formally constructed stone seating existed at this point, only ikria and the natural amphitheatre of the hill served as theatron.