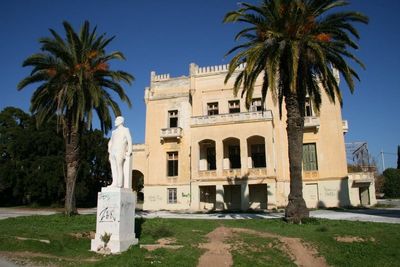 The area was puchased from a Turkish owner by an English archeologist after the Independence. He hoped he would make some interesting discoveries in this area. When this didn't happen, he sold the area to a wealthy businessman Andreas Syngros. Andreas Syngros landscaped the area and built the villa. The house was an important meeting place for the elite of Athens. Andreas Syngros wanted to leave the estate to Prince Andrew (GBR), but after a dispute with King George, he left the esate to his wife. She left it in 1920 to the state.

Recently, the estate has been renovated.