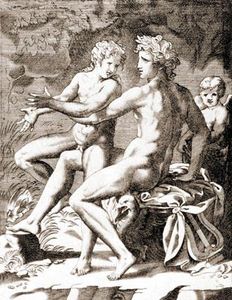 The Daphne Monastery is built on a place which has been sacred since ancient times. Here was a Temple of Apollo. The name Daphne (meaning laurel) refers to Apollo. The temple was destroyed around 395 because it was outlawed by the Christian emperor. You can still see a surviving column of the temple near the entrance of the monastery.