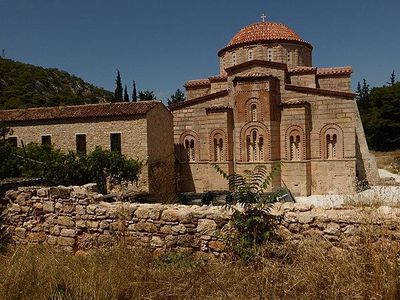 Daphni or Dafni is an eleventh-century Byzantine monastery eleven kilometers northwest of central Athens in the suburb of Chaidari, south of Athinon Avenue . It is situated near the forest of the same name, on the Sacred Way that led to Eleusis. The forest covers about 18 km2 , and surrounds a laurel grove. "Daphni" is the modern Greek name that means "laurel grove", derived from Daphneion .
The Daphni Monastery was founded towards the end of the sixth century A.D. on the site of the Sanctuary of Apollo which had been desecrated by the Goths in 395. The Sanctuary of Apollo was built in the Ionic style using the thinnest and smallest columns. The columns stand on a base with an ornamental scroll at the top. A few of the columns of the temple have been preserved. One of the four Ionic columns of the ancient Sanctuary of Apollo remains at the site, as it was re-used in the Daphni Monastery. The other columns were removed and taken to London by Thomas Bruce, Earl of Elgin . The columns, column bass, and column tops from the Sanctuary of Apollo are currently in the possession of the British Museum; they are currently not on display but can be seen on the museum’s website .