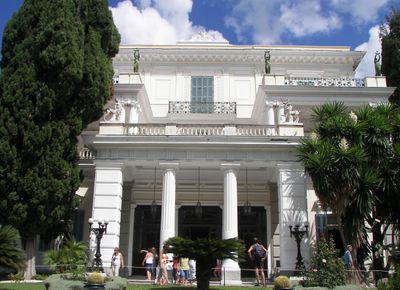 Achilleion is a palace built by the Empress of Austria Elisabeth of Bavaria, also known as Sissi. It is a very popular tourist hot spot on Corfu.

The casino scene of the James Bond film For Your Eyes Only was filmed here at the Achilleion.

The Achilleion has been used in recent times for the European summit meeting in 1994 and in 2003 it hosted the meeting of the European ministers for Agriculture.

This structure abounds with paintings and statues of Achilles, both in the main hall and in the gardens, depicting the scenes of the Trojan war.