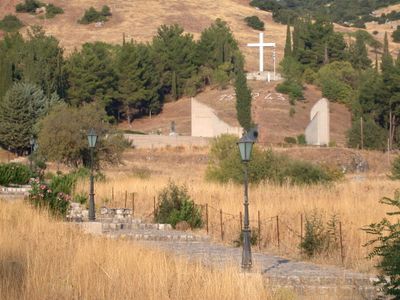 On 13 December 1943, the Holocaust or Massacre of Kalavryta took place. 81 German soldiers were captured and killed by partisans during the Nazi occupation in World War II. The German troops ordered all male residents of Kalavryta, aged 12 years and up, to gather in a field just outside the village. There, they machine-gunned down 696 of them. Only 13 survived. After that they burnt down the town before they left and the next day they burnt down the Monastery of Agia Lavra, birth place of the Greek War of Independence. No German commanders, (eg Major Ebersberger who carried out the destruction of Katavryta; Hauptmann Dohnert who led the firing party), were ever brought to book for these events.