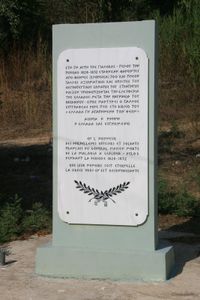 In Gialova you can find a monument for the French soldiers of General Maison who lost their lives after the big Battle of Navarino in 1827 due to malaria. They camped in the swampy area of Gialova to build up the area after the battles (the town of Pylos and the road to Methoni was built by the French). During September and October 1828, malaria hit them and 4,760 fell sick and 915 died of a total of 13,760 men. There is still a monument next to the chapel commemorating these men.