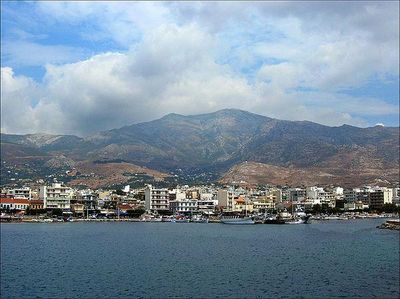 Karystos or Carystus is a small coastal town on the Greek island of Euboea. It has about 5,000 inhabitants . It lies 129 km south of Chalkis. From Athens it is accessible by ferry via Marmari from the port of Rafina. Its urban plan was laid out by the renowned Bavarian civil engineer Bierbach, in the middle of the 19th century, near the site of the ancient city of Carystus.

Karystos apparently remained inhabited throughout the early Middle Ages. As part of the theme of Hellas, it was also seat of a bishop – a suffragan of Athens – at least since the reign of Leo VI the Wise . It was among the towns listed in the 1198 chrysobull of Alexios III Angelos, where the Venetians were permitted to establish trade stations. In 1205 it was captured, as with the rest of the island, by Jacques d'Avesnes, and soon it became the seat of the southern third of Euboea under Ravano dalle Carceri.