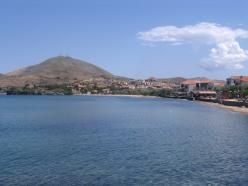 Lemnos is with 477 km² the 8th largest island of Greece. Lemnos is mostly flat (hence its more than 30 sand beaches), but the west, and especially the northwest part, is rough and mountainous (highest elevation: Mount Vigla, 470 m). Lemnos has a strong husbandry tradition, being famous for its feta and melipasto cheeses, and for its yoghurt. Lemnos was Constantinople's granary during Byzantine times. For ancient Greeks, the island was sacred to Hephaestus, god of metallurgy. Hephaestus fell on Lemnos when his father Zeus hurled him headlong out of Olympus..