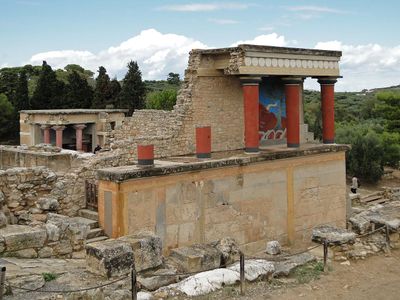 The northern Portico in Knossos is one of the most famous archaeological monuments we know (see photo). Unfortunately, it is based entirely on the imagination of one of the world's most famous archaeologists, Arthur Evans. The only thing that fits a bit is the fresco of which parts weere found here, but certainly not in this place. There was also no basis whatsoever that there was an entrance with a colonnade. But why stop creativity there? For the remarkable pillars he let himself be inspired by the fashion of the Art Deco buildings that he had seen in his own time.

In his defense, he felt he needed to bring history to life. And then a little creativity wasn't a scientific problem for this famous man. Arthur Evans also claimed to have discovered the site. But that is also incorrect.