The White Tower of Thessaloniki 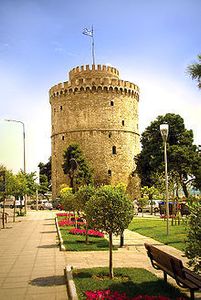 The White Tower, the waterfront boulevard, is the symbol of Thessaloniki. The tower dates from the period of the Ottoman Sultan Suleiman the Magnificent (1520- 1566). It was built as part of the city’s fortification, on the site of another tower, which was probably constructed by French knights, after the Crusaders conquered Constantinople.
This is a 33,90m high, circular tower with a diameter of 22,70m. It has six floors that connect to each other with stairs.
The last floor has a terrace that offers a wonderful view of the town. The Ottomans used this tower as a fort, a garrison and a prison. It has changed many names since its construction. In the 18th century, it was called the "Kalamaria Fortress". In 1826, the Sultan Mahmud II ordered a massacre of all its prisoners and after that the tower was named the Tower of Blood or the Red Tower.
The White Tower has played an important role to the city's air defense during the two World Wars and has hosted the University of Thessaloniki meteorology laboratory and, until 1983, the Sea Cadets. King George I of Greece was murdered a few metres away from the White Tower in 1913.
In 1985, the Tower was restored and today the Byzantine Museum of Thessaloniki is being housed there, whose collection includes pieces of sculpture and pottery, fragments of mosaic floors, orthodox icons, Byzantine coins, wall paintings and inscriptions, among others. The Museum frequently organizes exhibitions about the history of the city along centuries.
At night, the White Tower gets illuminated and stands out in the dark background. The boulevard below is the favorite beach promenade of the locals.