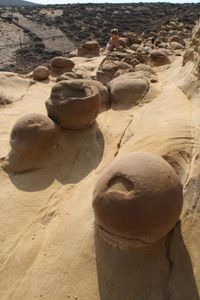 The round forms on Falakro Cape are examples of concretions formed within layers of sand strata. Concretions form early in the burial history of the sediment, before the rest of the sediment is hardened into rock. This concretionary cement often makes the concretion harder and more resistant to weathering than the host stratum. They quite often form by the precipitation of a considerable amount of cementing material around a nucleus, often organic, such as a leaf, tooth, piece of shell or fossil.Descriptions dating from the 18th century attest to the fact that concretions have long been regarded as geological curiosities. Because of the variety of unusual shapes, sizes and compositions, concretions have been interpreted to be dinosaur eggs, animal and plant fossils (called pseudofossils), extraterrestrial debris or human artifacts. But they are just simple cemented pieces of sand around a nucleus. Famous examples of such concretions are also found on concretions on Bowling Ball Beach (Mendocino County, California, USA).