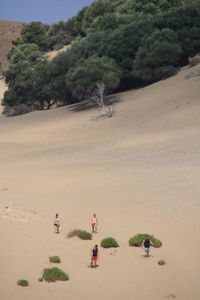 You might wonder why you get this quite unique Sahara-like landscape here on this spot in Limnos. You need a few conditions to explains this occurrence.

1) First you need a source of sand. And this is provided here by the stone layers called "flysch", which occurs a lot in the northern part of Lemnos. You can recognize these rocks easily because they have very clear layers of alternating sandstone and less coarse (and softer) mud stone layers in between. These rocks were created about 50 million years ago when this area was a sea (Paleocene). The surrounding mountains were sticking above sea level and were quickly eroded. The eroded sands and silts were washed down by the rivers and deposited in the sea: sometimes as a layer of sand and sometimes as a layer of finer silt and clay, depending on the currents (as today in the sea). Later on these layer became hard and were (partly) lifted above sea level. You can now see them here, but they are also below the shore line. You will see that most of these layers kept there horizontal position (except in some clear cases where the volcanic domes pushed and squeezed the layer as you can see clearly in the area of Myrina).

2) You also need a grinder to create (again) sand particles from that rock (flysch). If you try to break the sand rock in the flysch with your hand, you will realize it is quite a tough job to do. There are two main grinding mechanism going on here in the current climate. First you have the forceful activity of the waves, activated by the (mainly) NE wind pounding upon the beach rocks and breaking them down to smaller particles. Above sea level, you have the second grinder: the almost continuous wind, loaded with those sand particles are having an effect of abrasive blasting.

3) The third condition is a combined topographic and predominant wind condition: you need the wind to blow predominantly from the source of the sand particles (this is NE-SW) towards an area where it can be deposited (stopped). And you get this kind of topographic conditions here because the mountains have been lifted up to an altitude of about 300 meters, blocking that NE-SW wind. A more detailed wind model will show you that the wind in the specific area where the sand is gathered is just forceful enough to bring it here but not carry is much further (higher up).

4) And the fourth condition is that you need a climate that is dry enough not to cover the sand with vegetation. With rainfall less than 500 mm per year and an evaporation of more than 75%, the water that falls on this well drained soil is hard to use by plants, resulting in no vegetation cover at all or vegetation that needs almost no water.

And this combination of factors results in the occurrence of this quite unique landscape in this part of the world.