Fire at the cinema of Myrina

Greece » Περιφερειακή Ενότητα Λήμνου » Fire at the cinema of Myrina 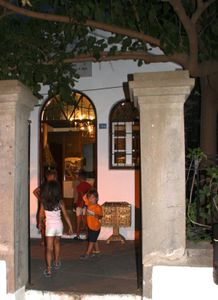 The first display of a movie in the theater that stood on this site resulted in the greatest disaster known on the island of Limnos. It was September 9 1939 and the former Turkish mosque was changed into a cinema hall. Almost the entire upper class of Myrina was gathered here to witness a unique event on the island: to see the first feature film in their local theater. At that time the films were made of highly flammable pelicule (see the movie "Cinema Paradiso" and "Inglorious Bastards"). The full hall burnt down and 57 people lost their lives (see list in the church). A small chapel was built here on this spot to commemorate the event.