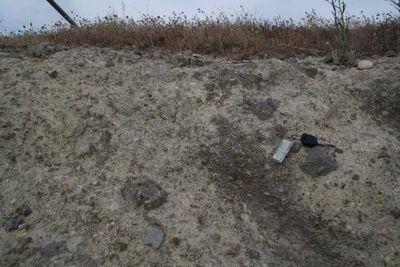 On the west side of the village Varos, you can see a very nice example of a petrified tree. It is part of a complete petrified forest which has been discovered on Lemnos. Around 20 million years ago, the surface of Lemnoss was covered by dense forests of palms, pine-trees and huge coast redwoods, which were buried under the lava. The pyroclastic deposits spit out by the volcanic explosions buried the forest and sealed it from the air so the trees coudn't rot. Gradually over time, the organic structure of the trees were replaced by silicium, but the structure/morphology of the plants were preserved, so paleontologists can determine their type. The greates part of the petrified forest is situated in Moudros and in the wider area of eastern Lemnos, while important vegetable fossils were found in the village Varos and in the area of Thermae.