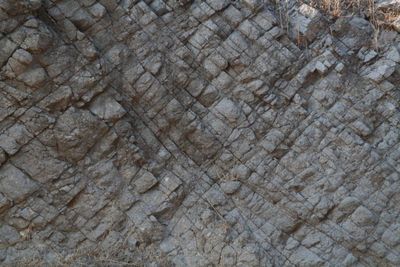 This small volcanic rock outcrop shows an interesting joint set. A joint is a break (fracture) of natural origin in the continuity of either a layer or body of rock that lacks any visible or measurable movement parallel to the surface (plane) of the fracture. Although they can occur singly, they most frequently occur as joint sets and systems. A joint set is family of parallel, evenly spaced joints that can be identified through mapping and analysis of the orientations, spacing, and physical properties. Faults differ from joints in that they exhibit visible or measurable lateral movement between the opposite surfaces of the fracture. As a result, a joint may have been created by either strict movement of a rock layer or body perpendicular to the fracture or by varying degrees of lateral displacement parallel to the surface (plane) of the fracture that remains "invisible" at the scale of observation.