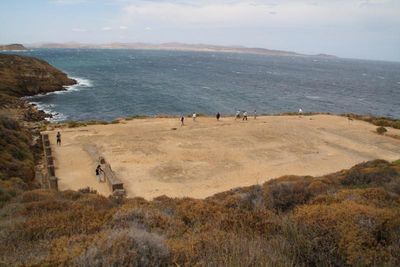 According to mythology, "Kaveirioi" were the three sons and the three daughters of Hephaestus and were worshipped in Limnos as deities. Their adoration was intensely mystic and it included the ceremonies that remained known as the "Kaveira Mysteries" and they were related with the rebirth of nature and the fertility. Kaveirio was the centre of this adoration. The excavations have brought in the light the sanctuary of the adoration that knew long period of life from the first limnian period (8th century B.C.) to the later antiquity. In the rocky coast is also found the cave of the mythic Filoktiti that was abandoned by his companions in the expedition against Troia.