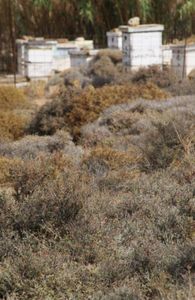 This type of bush in Greece is called "phryagana". The French would call it "garrigue". Phrygana is a type of low, soft-leaved scrubland ecoregion and plant community in the Mediterranean forests, woodlands, and scrub biome. It is found around the Mediterranean Basin, generally near the seacoast where the moderated Mediterranean climate provides annual summer drought. Because this type of shrubs produce great herbs to flavour foor, the term "garrigue" has also found its way into haute cuisine, suggestive of the resinous flavours. It is also a great source of flowers for bees to collect honey. It will be no surprise that with such an amount of phyrgana areas around the island, you get great honey on Lemnos. The phrygana is very frequently linked to the flysch outcrops which are dominant in the northern half of the island.