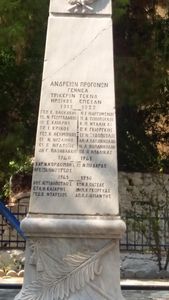 This war memorial tells a bit the history of this area. You can see that the war memorial commemorates the victims of 1912. That was the First Balkan War. This was the war of Serbia, Greece, Montenegro and Bulgaria against the weakened Ottoman Empire. In 1913, the Second Balkan War started already because of the Bulgarian dominance in the region as a result of the First Balkan War. On the island of Paleo Trikeri north of Trikeri, many Bulgarians were imprisoned and killed by neglecting food and water. This second Balkan war rolled into the First World War after a few months and then in the Greek-Turkish war. The parties contested these areas and parts of western Anatolia (Turkey). In 1922, a population exchange between Turkey and Greece was agreed. You'll also see the dead of the Second World War on this monument, but also deaths dating from of after the Second World War. These are from the Greek Civil War between 1946 and 1949. That civil war was between Greek Communist Guerrilleros, on the one hand, and the Greek Government, supported by the United Kingdom and the United States, on the other. Many people died on the the island of Paleo Trikeri north of this now peaceful village.