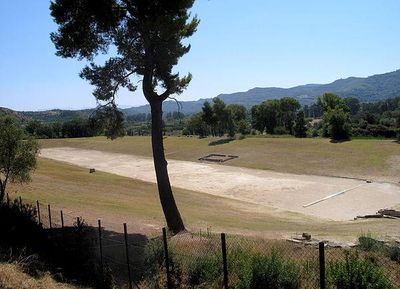 The stadium at the archaeological site of Olympia, Greece is located to the east of the sanctuary of Zeus. It was the location of many of the sporting events at the Ancient Olympic Games.

The physical landmarks of the Stadium are 212.54 meters long and 30-34 meters wide, and it served mainly for running races that determined the fastest person in the world. The track was made of hard-packed clay to serve as traction for the people competing in the running events. Like in current day athletics, a white block was placed on one end of the track where the athletes would line up to place their feet and got ready to start of the race. The white block was used to align all the athletes so they would all run the same distance.