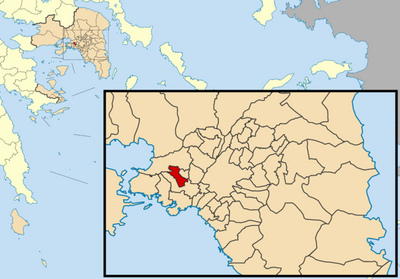 Korydallos is situated southeast of the mountain Aegaleo. It is located 7 km west of central Athens and 3 km north of Piraeus. The municipality has an area of 4.324 km2. The main street Taxiarchon has become a well known shopping center with many fashion shops and boutiques. People who live there are usually middle class families or the working class.

Korydallos was founded in ancient times, and was one of the 100 municipalities of ancient Athens democracy system at the end of the 6th century BC. Theophilos Corydalleus was a philosopher who lived in Corydallos. 200 years later, Korydallos was known as Koutsoukari after the property owner of the greater area, Emmanouil Koutsikaris. After that it was renamed into Pachy after the next owner . In 1923, the town was renamed back into its ancient name, Korydallos. The population in 1928 was 2,500. Korydallos was part of the municipality of Athens until 1934, when it became a separate community. It was elevated to municipality status in 1946. The city now boasts a population of 63,000.