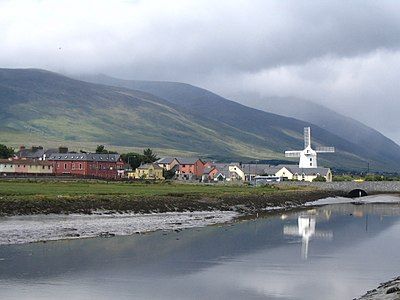 Blennerville is a small village and now a suburb of Tralee, County Kerry, Ireland. It is approximately 1 mile west of the town centre on the N86 road to Dingle, where the River Lee enters Tralee Bay. The village was formerly Tralee's port, and is connected to the town centre by the Tralee Ship Canal. Part of Blennerville electoral division falls within the area of Tralee Town Council, and at the 2011 census had a population of 141. The remaining portion, outside the urban boundaries, had a 2011 population of 556.
Blennerville was originally called Cathair Uí Mhóráin , and it has been speculated that it was the ancient site of the Tramore ford, the only escape route afforded to the 15th Earl of Desmond from Tralee towards the south, before his capture and execution in 1583.