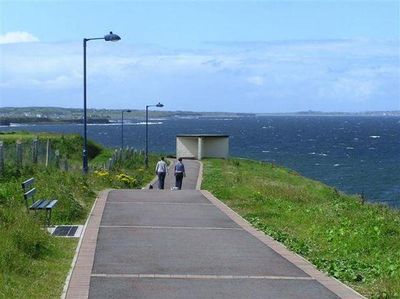 Bundoran is a town in County Donegal, Ireland. The town is located on the N15 road near Ballyshannon, and is the most southerly town in Donegal. The town is a tourist seaside resort, and tourism has been at the heart of the local economy since the 18th century. Bundoran is a world-renowned surfing area and was listed by National Geographic magazine in 2012 as one of the World's Top 20 Surf Towns.This article of top 20 surf towns does not mention Bundoran.
Bundoran, or Bun Dobhráin in Irish was, up until over a century ago, two separate villages. Bundoran was the village west of the bridge over the River Bradoge. This area is now called the West End. East of the bridge, about 2 kilometres away, was the village of Single Street. In between these two separate communities was the townland of Drumacrin. The area of Drumcacrin is now part of what is today's town centre. Single Street was where most of the local population lived. It was only after completion of the Enniskillen and Bundoran Railway in 1868, which opened a terminus that it called Bundoran, that the two distinct communities developed and merged to what are today called Bundoran.