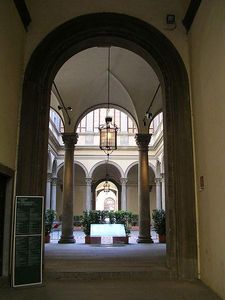 The construction of the palace was begun in 1489 by Benedetto da Maiano, for Filippo Strozzi the Elder, a rival of the Medici who had returned to the city in November 1466 and desired the most magnificent palace to assert his family's continued prominence and, perhaps more important, a political statement of his own status. A great number of other buildings were acquired during the 1470s and demolished to provide enough space for the new construction. Giuliano da Sangallo provided a wood model of the design. Filippo Strozzi died in 1491, long before the construction's completion in 1538. Duke Cosimo I de' Medici confiscated it in the same year, not returning it to the Strozzi family until thirty years later.

Palazzo Strozzi is an example of civil architecture with its rusticated stone, inspired by the Palazzo Medici, but with more harmonious proportions. Unlike the Medici Palace, which was sited on a corner lot, and thus has only two sides, this building, surrounded on all four sides by streets, is a free-standing structure. This introduced a problem new in Renaissance architecture, which, given the newly felt desire for internal symmetry of planning symmetry: how to integrate the cross-axis. The ground plan of Palazzo Strozzi is rigorously symmetrical on its two axes, with clearly differentiated scales of its principal rooms.