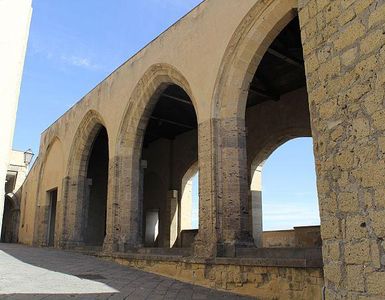 Castel dell'Ovo is a seaside castle in Naples, located on the former island of Megaride, now a peninsula, on the Gulf of Naples in Italy. The castle's name comes from a legend about the Roman poet Virgil, who had a reputation in the Middle Ages as a great sorcerer and predictor of the future. In the legend, Virgil put a magical egg into the foundations to support the fortifications. Had this egg been broken, the castle would have been destroyed and a series of disastrous events for Naples would have followed. The castle is located between the districts of San Ferdinando and Chiaia, facing Mergellina across the sea.

The Castel dell'Ovo is the oldest standing fortification in Naples. The island of Megaride was where Greek colonists from Cumae founded the original nucleus of the city in the 6th century BC. Its location affords it an excellent view of the Naples waterfront and the surrounding area. In the 1st century BC the Roman patrician Lucius Licinius Lucullus built the magnificent villa Castellum Lucullanum on the site. Fortified by Valentinian III in the mid-5th century, it was the site to which the last western Roman emperor, Romulus Augustulus, was exiled in 476. Eugippius founded a monastery on the site after 492.