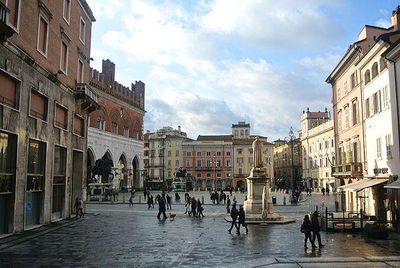 Piacenza ; Piacentino: Piaṡëinsa [pi.aˈzəi̯sɐ]; Latin: Placentia) is a city and comune in the Emilia-Romagna region of northern Italy, the capital of the eponymous province. The etymology is long-standing, tracing an origin from the Latin verb placēre, "to please." In French, and occasionally in English, it is called Plaisance. The name means a "pleasant abode", or as James Boswell reported some of the etymologists of his time to have translated it, "comely". This was a name "of good omen."
Piacenza is located at a major crossroads at the intersection of Route E35/A1 between Bologna and Milan, and Route E70/A21 between Brescia and Turin. Piacenza is also at the confluence of the Trebbia, draining the northern Apennine Mountains, and the Po, draining to the east. Piacenza also hosts two universities, Università Cattolica del Sacro Cuore and Polytechnic University of Milan.