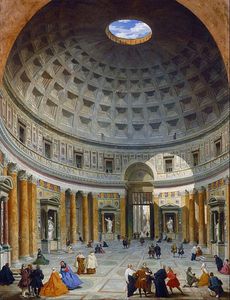 The Pantheon is a former Roman temple, now a Catholic church , in Rome, Italy, on the site of an earlier temple commissioned by Marcus Agrippa during the reign of Augustus . It was completed by the emperor Hadrian and probably dedicated about 126 AD. Its date of construction is uncertain, because Hadrian chose not to inscribe the new temple but rather to retain the inscription of Agrippa's older temple, which had burned down.
The building is cylindrical with a portico of large granite Corinthian columns under a pediment. A rectangular vestibule links the porch to the rotunda, which is under a coffered concrete dome, with a central opening to the sky. Almost two thousand years after it was built, the Pantheon's dome is still the world's largest unreinforced concrete dome. The height to the oculus and the diameter of the interior circle are the same, 43 metres .