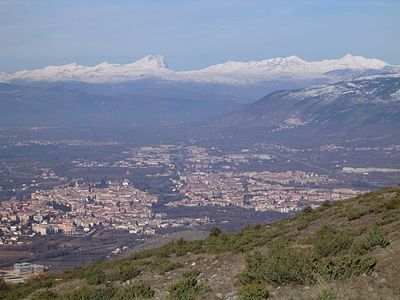 Sulmona is a city and comune of the province of L'Aquila in Abruzzo, Italy. It is located in the Valle Peligna, a plateau once occupied by a lake that disappeared in prehistoric times. In the ancient era, it was one of the most important cities of the Paeligni and is known for being the native town of Ovid of whom there is a bronze statue in the Piazza XX Settembre, located on the town's main road which is named after him.
Sulmona was one of the principal cities of the Peligni, as an independent tribe, but no notice of it is found in history before the Roman conquest. A tradition alluded to by Ovid and Silius Italicus, which ascribed its foundation to Solymus, a Phrygian and one of the companions of Aeneas, is evidently a mere etymological fiction. The first mention of Sulmo occurs in the Second Punic War, when its territory was ravaged by Hannibal in 211 BC, who, however, did not attack the city itself. Its name is not noticed during the Social War, in which the Paeligni took so prominent a part; but according to Florus, it suffered severely in the subsequent civil war between Sulla and Gaius Marius, having been destroyed by the former as a punishment for allegiance to his rival. The writings of that rhetorical writer are not, however, to be taken literally, and it is more probable that Sulmo was confiscated and its lands assigned by Sulla to a body of his soldiers. In all events it is certain that Sulmo was a well-peopled and considerable town in 49 BC, when it was occupied by Domitius Calvinus with a garrison of seven cohorts; but the citizens, who were favorably inclined towards Julius Caesar, opened their gates to his lieutenant M. Antonius as soon as he presented himself.