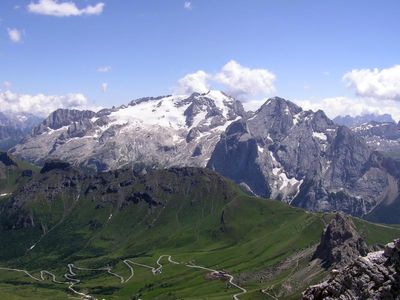 Before the First World War, the border between Austria and Italy was located over this mountain. The Marmolada was the frontline in World War One. Both the Austrian and Italian soldiers were hidden in deep tunnels in glaciers and rocks. In the severe winter of 1916, eight to ten meters of snow fell. During an avalanche on November 11, 1916, 123 Austrian soldiers were killed and 51 were missing. But one month later an avalanche at the Punta Penia caused 300 deaths on the Austrian side.