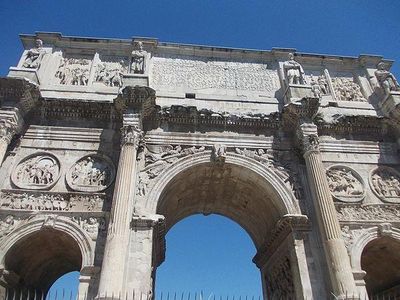 The Arch of Constantine is a triumphal arch in Rome dedicated to the emperor Constantine the Great. The arch was commissioned by the Roman Senate to commemorate Constantine’s victory over Maxentius at the Battle of Milvian Bridge in AD 312. Situated between the Colosseum and the Palatine Hill, the arch spans the Via triumphalis, the route taken by victorious military leaders when they entered the city in a triumphal procession. Dedicated in 315, it is the largest Roman triumphal arch, with overall dimensions of21 m high, 25.9 m wide and 7.4 m deep. It has three bays, the central one being 11.5 m high and 6.5 m wide and the laterals 7.4 m by 3.4 m each. The arch is constructed of brick-faced concrete reveted in marble.

The three bay design with detached columns was first used for the Arch of Septimius Severus in the Roman Forum and repeated in several other arches now lost.