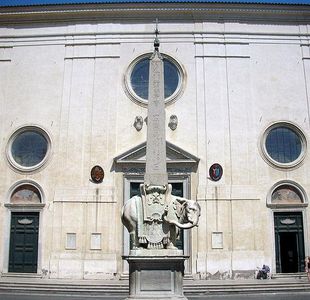 Elephant and Obelisk is a statue of an elephant carrying an obelisk, designed by the Italian artist Gian Lorenzo Bernini. It was unveiled in 1667 in the Piazza della Minerva in Rome, adjacent to the church of Santa Maria sopra Minerva, where it stands today.

The red granite obelisk was discovered in 1665 during excavations near the church of Santa Maria sopra Minerva. It had probably been brought to Rome in the first century AD for the temple to the Egyptian goddess Isis that was located there. The obelisk was originally erected by Pharaoh Apries of the Twenty-sixth Dynasty of Egypt, about 580 BC, in his capital Sais.