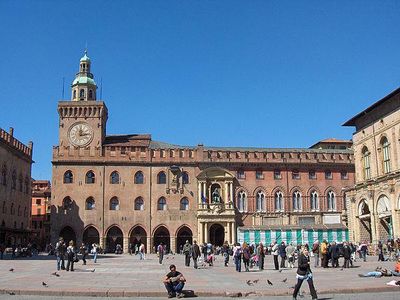 Palazzo d'Accursio is a palace once formulated to house major administrative offices of the city of Bologna, region of Emilia-Romagna, Italy. It is located on the Piazza Maggiore, and is the city's Town Hall. The palace is also home to the Civic Art Collection, with paintings from the Middle Ages to the 19th century; the Museo Morandi, with the works by Giorgio Morandi; and the Biblioteca Salaborsa, the town libraries.

The earliest structure of the Palazzo d'Accursio originally began as the residence of the jurist Accursius, but over time, it incorporated and expanded to include adjacent buildings to house civic offices. In 1336 it became the seat of the Anziani , the highest magistrates of the commune, and then seat of the government. In the 15th century it was refurbished under the designs of the architect Fioravante Fioravanti, who added the Clock Tower . The bell in the tower was installed by Gaspare Nadi. Further reconstruction occurred in the 16th century, after the fall from power of Bentivoglio family in Bologna.