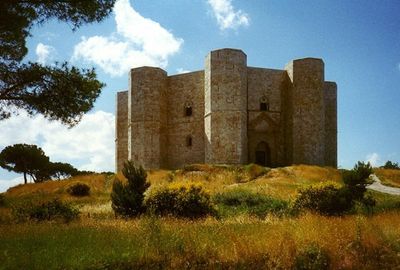 Castel del Monte or Castle of the Mount was constructed during the 1240s by the Emperor Frederick II. The site is protected as a World Heritage Site. One theory states that the octagon is an intermediate symbol between a square (representing the earth) and a circle (representing the sky). Frederick II may have been inspired to build to this shape by either the Dome of the Rock in Jerusalem, which he had seen during the Sixth Crusade, or by the Palace Chapel of Aachen Cathedral.