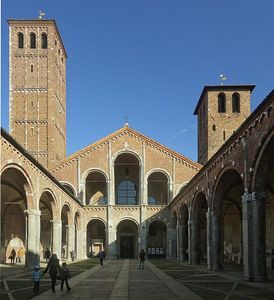 One of the most ancient churches in Milan, it was built by St. Ambrose in 379–386, in an area where numerous martyrs of the Roman persecutions had been buried. The first name of the church was in fact Basilica Martyrum.

When St. Ambrose arrived in Milan, the local churches were in conflict with each other over the conflict between Arianism and the Nicene Creed as well as numerous local issues. He was firmly in support of the Nicene side of the conflict, and wanted to make northern Italy into a pro-Rome stronghold. He did this through both preaching and construction. He built three or four churches surrounding the city; Basilica Apostolorum , Basilica Virginum , and Basilica Martyrum . A fourth church, Basilica Salvatoris is attributed to him as well, but may not actually be from the 4th century. These churches were dedicated with anti-Arian language and as symbols of the wealth and power of the pro-Nicene faction in Milan.