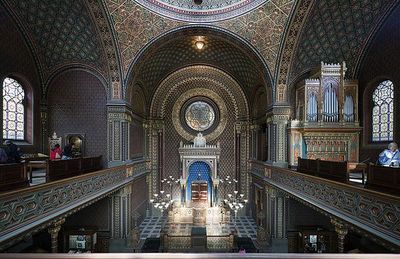 The Spanish Synagogue is not the first synagogue at the site. Before it there stood probably the oldest synagogue in Prague Jewish Town, Altschule. In the second half of 19th century, the capacity of the Altschule did not suffice. The modernist faction in the community, which renovated it in 1837 for the purpose of moderately reformed services, therefore decided to demolish the synagogue in 1867 and one year later it was replaced by the new, Spanish Synagogue. Its name presumably refers to the style in which it was built, Moorish Revival style, which was inspired by the art of Arabic period of Spanish history . The architectural plans were designed by Vojtěch Ignác Ullmann and Josef Niklas .